Shifting from the Binary: Analyzing Climate Change Adaptation through the Intersectionality Lens


‘Understanding the diversities and interactions in men and women groups is the concept of intersectionality’
It is now widely recognized that the impacts of climate change and variability are not uniformly felt amongst communities in Africa. For example, based on their roles and responsibilities, female farmers and male farmers have differentiated vulnerabilities to climate change and consequently develop differentiated coping and adaptation strategies. However, it is important to recognize that addressing climate change impacts goes beyond whether one is a female or a male.  For a long time now, the issue of gender in climate change has been addressed through the binary lens i.e. male vis a vis female. While using this lens has brought to the fore that adaptation and mitigation strategies should address issues of equity, it is now increasingly becoming apparent that there are other dimensions such as religion, ethnicity, age, race, educational level and socio-economic levels that need to be considered during the development and implementation of adaptation and mitigation strategies. This was the main message emerging from the presentations made by Mercy Derkyi and Catherine Mungai during the Gender mainstreaming session at the 4th Climate Change and Population Conference on Africa (CC POP-Ghana 2015). The conference which was held at the University of Ghana from 29 - 31 July 2015, created an ideal platform to share ongoing research on climate change in Africa ahead of the upcoming 21st session of the Conference of the Parties to the United Nations Framework Convention on Climate Change (COP 21). Dr Derkyi and Ms Mungai were supported to attend the conference as part of their Climate Impact Research Capacity and Leadership Enhancement in Sub-Saharan Africa (CIRCLE) fellowship programme.

Experiences from the forest and agriculture sectors in Ghana 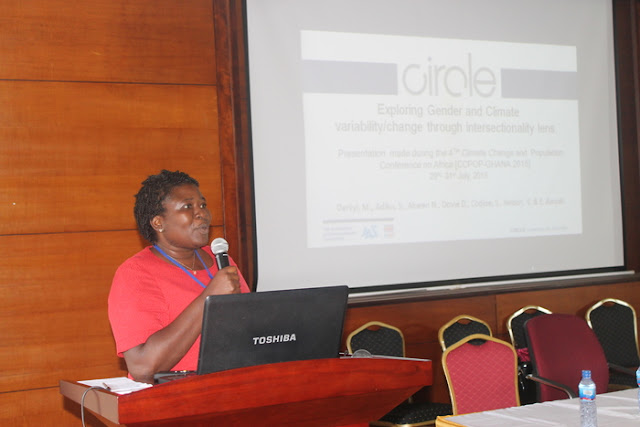 During her presentation on “Exploring Gender, Climate Change Vulnerability and Adaptive Capacity through an Intersectionality Lens,” on behalf of co-authors, Mercy emphasized the need for using an intersectionality lens to analyze climate change adaptation in the forest and agriculture sectors.  She pointed out that in most rural settings, the roles and responsibilities of gender are socially and culturally defined and these determine how communities experience and respond to climate change and variability. She further added that, disaggregated data by gender and more specifically its intersection with other social groups like class, age and wealth in Ghana are scarce. Most studies tend to focus on single variable such as gender thus projecting it as binary and such focus obscures the fact that gender takes meaning from its intersections with other identities. Through a literature review, she explains what intersectionality is and why it is needed; principles governing it and comparative analysis with other approaches; Gender as intersectionality and empirical evidence; Intersectionality in climate issues and steps to integrate intersectionality in academic research. Quoting Hankivsky (2014) she said ‘People’s lives are multi-dimensional and complex thus shaped by different factors and social dynamics operating together’. She concludes that Intersectionality may not be a ‘’cure for all’’ but if explicitly oriented, it transforms, build coalitions among different groups and work towards social justice especially among gender and intersecting categories in the era of climate change. 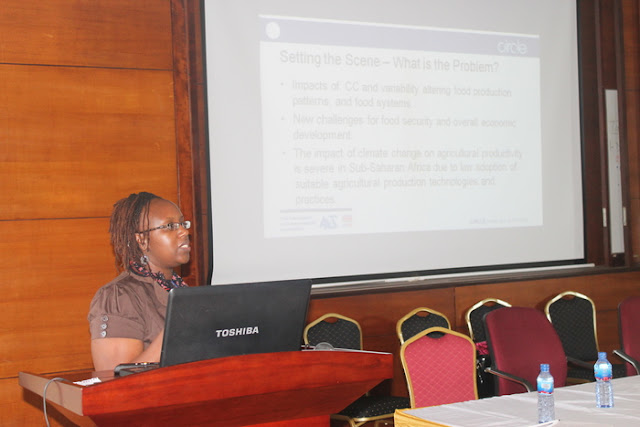 Focusing on the agricultural sector, Catherine gave a presentation under the topic “Engendering Climate-Smart Agricultural Innovations in Kenya.” In her presentation, Catherine focused on the use of the intersectionality lens to analyze the uptake of climate-smart agricultural (CSA) technologies and practices in Nyando, Kenya. Catherine pointed out that the adoption of CSA, supported by enabling frameworks and institutions, is crucial to transforming African agriculture into a long-term and sustainable system. She further added that studies undertaken amongst farmers in Africa have shown that gender relations determine the ways in which the changing climate is experienced by small holder farmers. However, she also emphasized that not all women (nor all men) are the same in that they do not all have the same roles, levels of access to, and control over, resources or power in decision-making, since gender norms are also related to race, class, ethnicity, religion, and age. Using Nyando as a case study, emerging results from her studies reveal that there are differences in the uptake of climate-smart agricultural technologies and practices between different categories of men and women farmers. Nyando in Kisumu, Kenya is one of the learning sites where ongoing research on climate-smart agricultural technologies and practices, is being undertaken by the CGIAR Research Program on Climate Change, Agriculture and Food Security (CCAFS).

As a way forward both presenters emphasized the need to use the intersectionality lens to enhance the understanding of the synergies between gender and climate change in order to ensure that polices, strategies and plans on adaptation and mitigation to climate change yield equitable results for communities.

Please click on the following links to access the presentations:
Exploring Gender, Climate Change Vulnerability and Adaptive Capacity through an Intersectionality Lens
Engendering Climate-Smart Agricultural Innovations in Kenya
This blog story was written by :